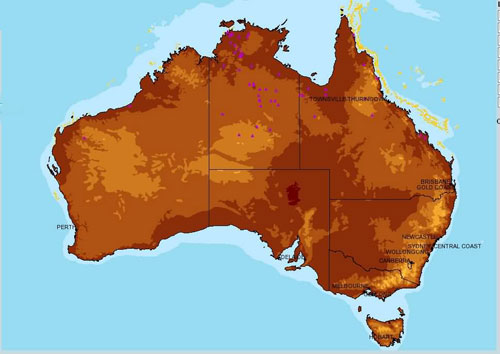 The Blackhead Python (Aspidites melanocephalus) has long been a fixture in the aura and mystique of Australia’s outback. Blackheads, along with the better-known Woma, occupy the genus Aspidites, a group thought to be one of the most ancient of all pythons. Both members of this genus are widely considered primitive pythons. This is mainly due to their lack of the thermoreceptive labial pits along the upper and lower “lip” scales, traits found in every other python. Gerard Krefft officially described Aspidites melanocephalus on July 28, 1864.

Found along the upper third of Australia, this python is at home in a variety of habitats from sandy ridges at the edge of deserts to lush sub-tropical forests and savannas. Wild Blackheads are largely fossorial and prey almost exclusively upon other cold-blooded animals. A variety of skinks, agamids, and other snakes (including highly venomous species) make up about 90% of their wild food source. The other 10% can be attributed to the rare mammal or bird. Blackheads can be considered medium-sized pythons. Adult males typically reach lengths of 6 to 8 feet and weigh 6 to 10 pounds. Females are generally larger, averaging lengths of 8 to 12 feet and weights of 10 to 20 pounds.

Blackheads are obviously named for their striking black head and neck and are sometimes referred to as “Tommy Tar Pots” by locals because they look as if their shiny heads had been freshly dipped into a pot of tar. The purpose for this hood is poorly understood, but one possibility could be camouflage for entering dark burrows with little detection. It also has been suggested that the hood is beneficial to basking in cooler temperatures. Blackheads, while cool and their reactions slow, can stay concealed but safely expose the jet-black head to the sun allowing the brain and body to gain function. The width of the head is not particularly distinct from the neck and allows them to hunt the narrow earthen burrows of goannas and skinks with ease.

In addition to the jet-black hood, Blackheads have a banded pattern across the body. These are remarkably variable pythons and there are tremendous differences in band width, spacing, and overall count from specimen to specimen. Coloration of the body is also highly varied. The base color can range from a light brown through brilliant white or banana yellow. The banding itself can even be black, brown, red, orange, or shades in between. On rare occasions, some Blackheads go through incredible color transformations during early adulthood (5 to 7 years of age). This transformation is usually rapid and involves the replacement of dark pigment in the banding and ground color with pastel shades of red, pink, and orange.